Each of the customer you see  that lines up in front of JCO has its own story to tell. Just like any of them,  I wouldn't waste my time waiting in  line for two hours for no reason at all.  Yes people!  Two hours of waiting and it has no exaggerating words involved.   I am a fan of donut  and  JCo just proved  why they're now the latest  craze in town.  Search  for  JCo and you will find other  people's review over  those  holed flavored sweet doughnuts.

I went to Trinoma to cover MEZZA NORTE event last Friday night. I have been telling my children  before that I will buy them JCO donuts when  there is  a  nearby  JCO  but everytime  I see  a store with people  in a zigzag  line, I always find  another store instead  like KK, NutsGonuts  or   Dunkin  Donuts.  Last Friday,   I  was determined to get a box of JCO donuts.  Why?  Read  my previous post.

Ok, enough for my wordy post. So truth be told.   The young man standing before me with  a bear stuff on his  hand has his own  explanation  too.  For two hours of  waiting, I got to know his justifiable cause,  enough for him to wait for long hours.  That is, to buy donuts for his girlfriend!  Ooh.  That was really sweet!   I wish I could say congratulations  to his girlfriend  finding such a man so rare today.   Oh well, just as   how he justified his,  two hours for me  weren't  enough to repay  my daughter  for  accidentally  erasing  her files. At least to say,  I sincerely apologize. 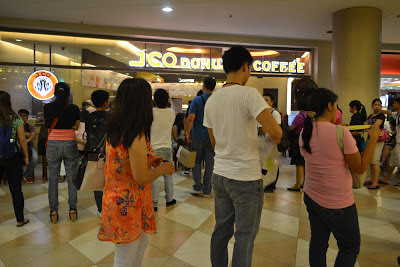 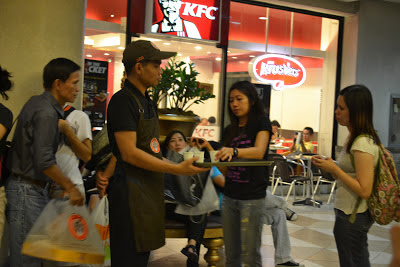 and waiting...  and the staff gave a glass of water to some of  their customers while waiting..and waiting again.  I wish  that my  iPad  wasn't disabled that day so I could have used up my time blogging while waiting in  a long long line. 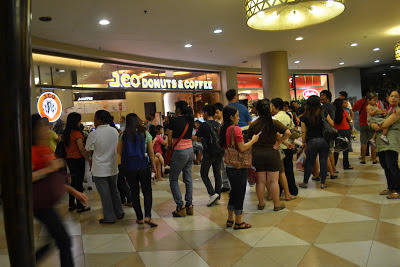 and still  waiting..  An aerial view would have been better to give you  an idea how it looked like.  I was on the 70th when I arrived.  Seriously,  no joke. 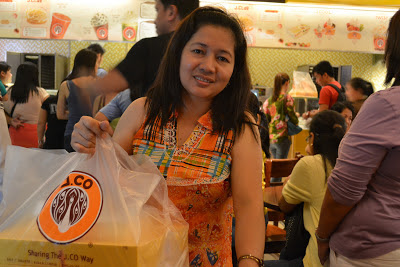 Finally!  Yes, finally after two long long hours!  I left the store at 10:30 and there was about 50  more people outside waiting. And the staff once asked the customers one by one how many boxes  to order  to  determine and estimate  the boxes of donuts they  need  and how many customers to accommodate.  And I asked the staff,  "how many more boxes of donuts are available?"  He replied, at 10:30pm,  "we only have 150 dozens  available."   It  looks like they  need to cut down the line and give the last customer  to be served  a banner that says,  "last customer."  for the day.