We earlier planned  for  a road  trip for a day, visiting heritage sites and  swing by  in my hometown  in Batangas.    The said  trip  became a grand  vacation  and  pushed all the way to a resort where we called home  for a while.

Our first stop before heading Taal,  literally stop for a photo at  the ark, "Welcome Poblacion Taal." 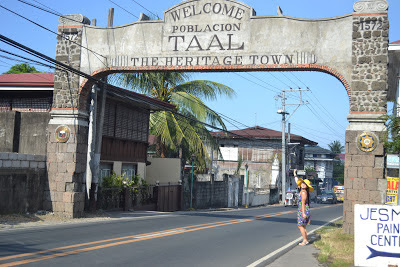 The photo above is not me but my model for free, Joy of  OccasionsofJoy.com.

Taal  is just a few minutes away from my  hometown.   I  frequent Taal as it is the next  town  from my home  in Batangas  but I  have no idea of the story behind  the heritage sites.   One of the houses that we visited was   Casa Villavicencio, the house   that  served as refuge of  our  heroes.   It is embarrassing to say  that  I  only  got  to learn  the story  behind  the house that we visited during   that  quick  tour.    We owe  a lot  to our  heroes  who fought  for  our  freedom that we are embracing today.   I  also only  learned  about  other heritage sites like  Don Leon  Agoncillo Casa, Galleria  Taal. Casa San Martin, Gregorio Agoncillo  to name a  few.

Two  notable heroes from Batangas are  Apolinario Mabini and General Miguel Malvar.   Batangas is known as Cradle of  Noble  Heroes.   One  of  those who supported the revolution  was  Gliceria Marella de Villavicencio,  the forgotten  heroine of   the  Philippine Revolution. 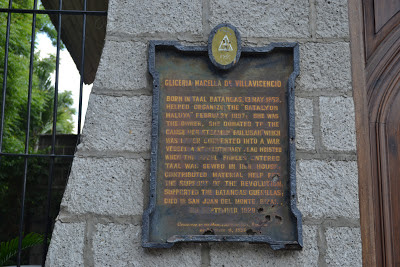 To  give you a brief  history,  Gliceria Marella de Villavicencio also known as "Aling Eriang"    was born in Taal.  The house on top of the hill,  Casa Villavicencio,  was a wedding gift to her by  her husband Eulalio Villavicencio, also a descendant of a wealthy  family in Batangas.  The house  was not only the refuge of battle weary soldiers but also the secret meeting place of revolutionary leaders.

We were lucky to have been welcomed and  toured us around the house  by  Mr.  Ernie Villavicencio,  the fourth generation descendant  and great grandson.  Because of his passion to maintain the heritage site,  he began to restore the house in 1994 and it took many years  before it was finally done,  together with his wife, Maria Rosario Ria Saldana Benedicto.   The  couple  spearheaded  the  advocacy  to maintain the heritage sites  in Taal. 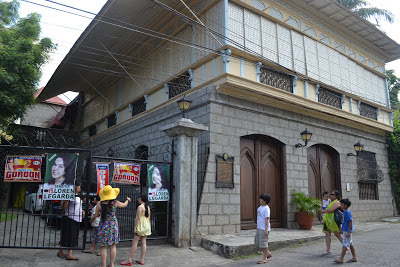 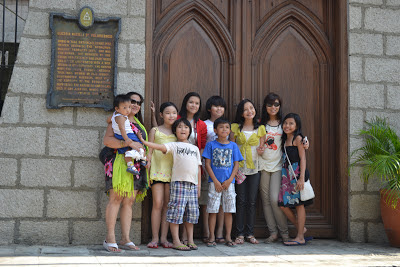 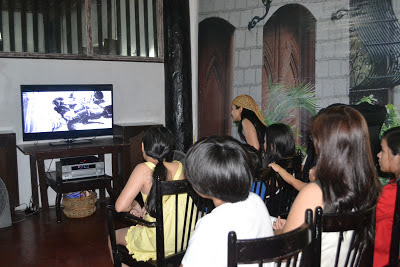 The children watch a short video of the history of the Casa Villavicencio before proceeding to a short tour. 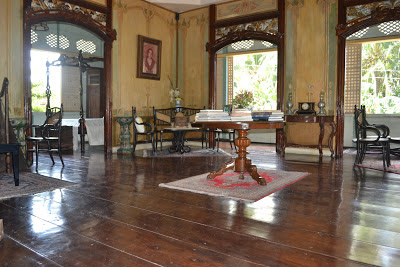 The  house  materials  such as Narra, Ipil and Molave were  solid  that were  built  to last  many years.  One of  the staff   told us  that  a  group of  students from Manila   just   visited  the place for a  heritage tour lately. 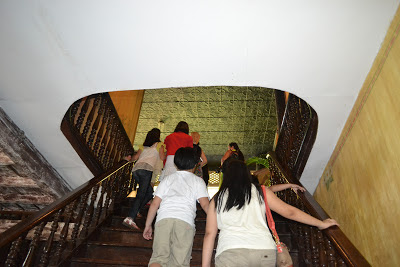 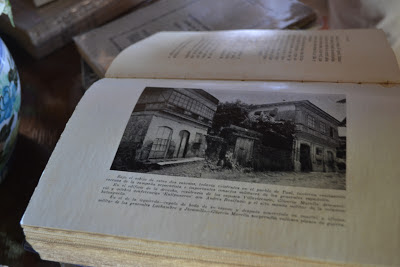 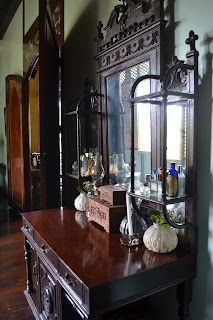 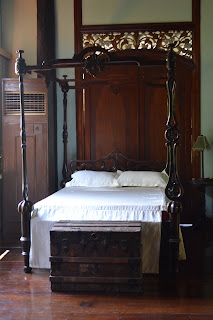 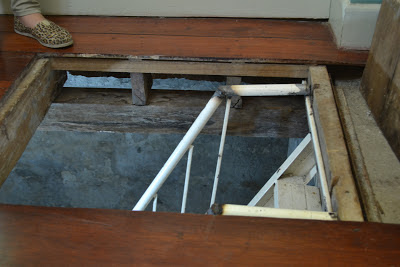 Mr. Villavicencio showed us a secret  passage  leading to the  tunnel going  to  Taal  Church. He said that there are  other  secret  tunnels  inter-connecting  big ancestral houses  and  that also connect  to  Taal  Basilica.

A number of Katipuneros disguised themselves as cock fighters or as merchants and secretly met  in the house.  Among  them is  the Supremo himself,  Andres  Bonifacio. 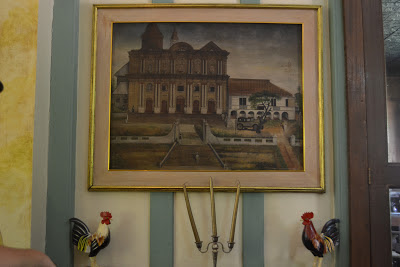 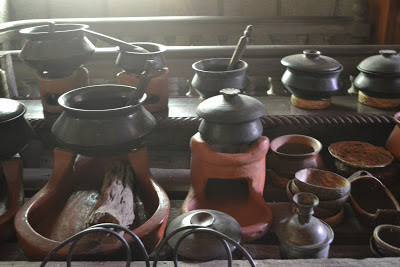 The old clay pot.  You could just imagine the way of life back then.

From the window,  the beautiful view of  Balayan Bay and the whole coastal of Taal and Lemery is a breathtaking site during that era. Today,  that  view is being blocked  by  different  structures in town.  You could  see only a  little view of  blue sea from afar now.  I could just imagine how breezy it was just facing the window  overlooking  the  sea during that era. 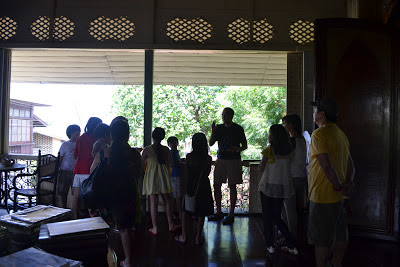 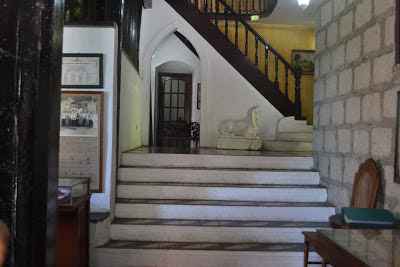 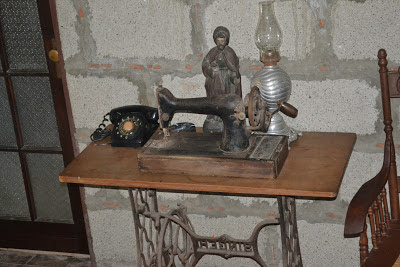 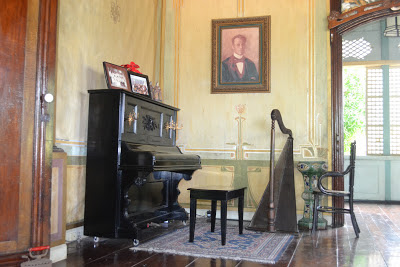 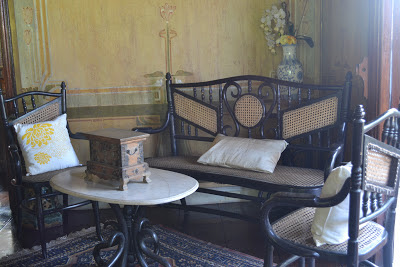 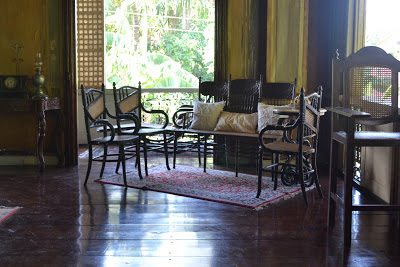 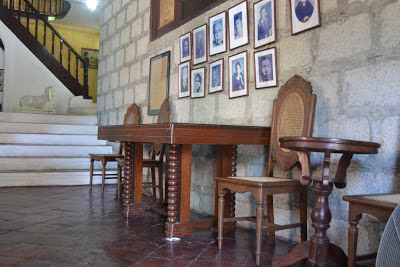 I could feel  a 42 degree Celsius warm  that day  and  the children  as such  was  inflamed too to dig  more of the rich  stories  of   Taal.   The  quick tour made them hunger   to discover deeper of  the history  of   town.

Other places that  Mr. Villavicencio recommended   us  is  Don Juan BBQ  but we were in a hurry  that day  because  we're  rushing as the children were already  sweating out  at the  peak of  hot temperature at 12 noon time.   We will definitely include the place in our  places-to-visit  list next.

Casa Villavicencio is open Monday to Sunday for  an  entrance fee of P100 and that includes  photo ops, coffee and snack.

For other  info about  heritages site in Taal,  please  visit their website:  taal.ph/


"You well know I am willing to shed my last drop of blood for the good of our country. I have sacrificed everything, even what is most sacred to me, my husband's life, and if necessary, my fortune and life and that of my children  for the freedom of the Philippines."-  Gliceria Marella de Villavicencio