Dermcare have continuously shared their unfailing love and concern for their customers for two decades, delivering utmost satisfaction to your every vanity regardless of gender, age, social standing, and personal preferences. They treat their clients as the center and as part of their family. This is why Dermcare delivers manifest through repeat customers that keeps coming back for the very reason that they feel that they belong.

Understandably, you would only want the best for the ones you hold dear to your heart. This is why Dermcare has up the ante, so everyone in your family and social circle can experience the care and passion that only Dermcare can give.

Channeling your beauty to radiate doesn’t come overnight, your skin requires pampering and care of a professional center that understands your needs. A center that provides all your skin pampering necessities has now come into full bloom as it introduces its new look and logo.

Dermcare's new logo is fused together with the care-centric ideals that they have at present. The flowers represent their growing clientele and how it has captured the hearts and gained the trust of the public. 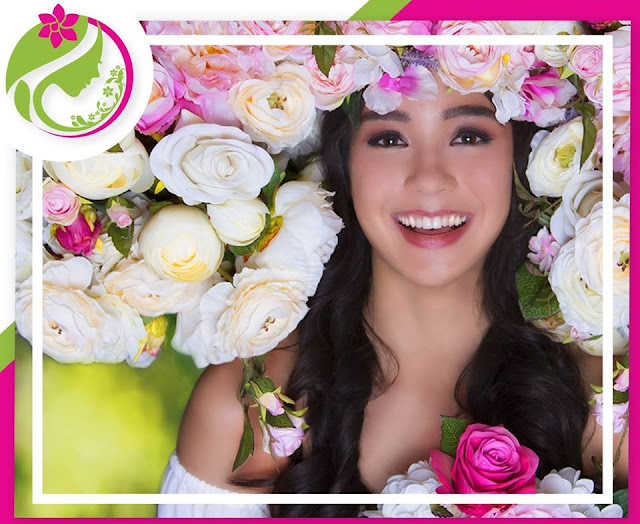 True to its mission, Dermcare desires to foster care to its numerous clients by providing top-quality skin, hair and wellness services, as well as encompass the years of remarkable love and care for their customers.

Pag-IBIG Loyalty Card recently awarded Dermcare the “Loyalty Cardholder’s Favorite Partner” which equated to the number of cardholders who had the privilege to enjoy discounts at Dermcare branches nationwide.

Pag-IBIG Fund launched its Pag-IBIG Loyalty card Program in the year 2014. The program aims to extend the benefits given by Pag-ibig Fund to its members not just thru short term and housing loans but also to give them additional privilege in other necessities. Dermcare has been a Partner of Pag-IBIG Loyalty card since then. 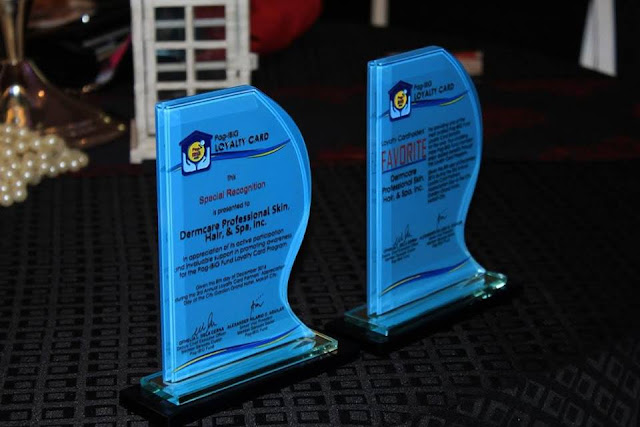 Dermcare has served the Pag-IBIG members nationwide thru its more than 80 branches.  In 2016 alone, Dermcare has already extended an accumulated amount of more than P500,000 worth of discounts to around 2,000 Pag-IBIG Loyalty card members  who enjoyed up to 50% discount of Dermcare services and products.

If you are looking for an activity that will train your kid or kids 6 to 17 years of age, enrol him/her or them at Spalding Summer Camp 2017.

Spalding Summer Camp is run by The Hoops School. The Hoops School was established in year 2002 to teach kids the correct way of playing basketball, from physical skills and drills and the mental aspects as well. They started at Meralco Gym, but now conducts its camps and clinics in more than 70 venues nationwide, including schools, malls and company gyms.

Most of their instructors have been carefully selected – many are former team trainers and coaches, most of whom have BS-Education degrees in Physical Education. This is on purpose because they are more patient with kids. Other coaches who have trained abroad, like one Coach who attended several coaching clinics in Europe, another who attended a coaching clinic in South Korea, a third coach who is presently teaching basketball at the 5-Star Camps in the US. Most of their coaches play basketball and understand basketball.

Spalding Basketball Camp 2017 will be in these following venues: 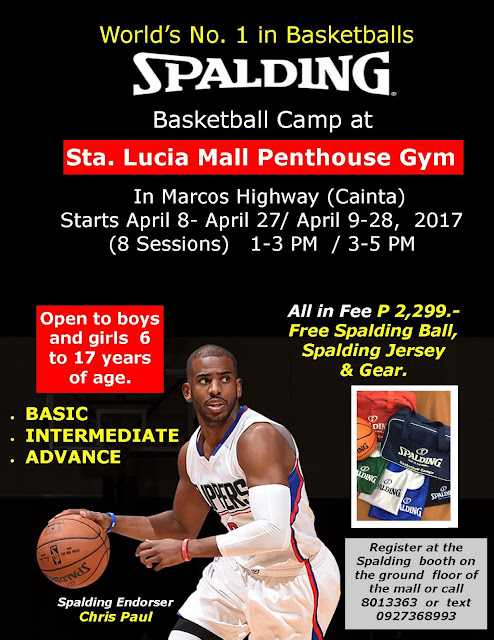 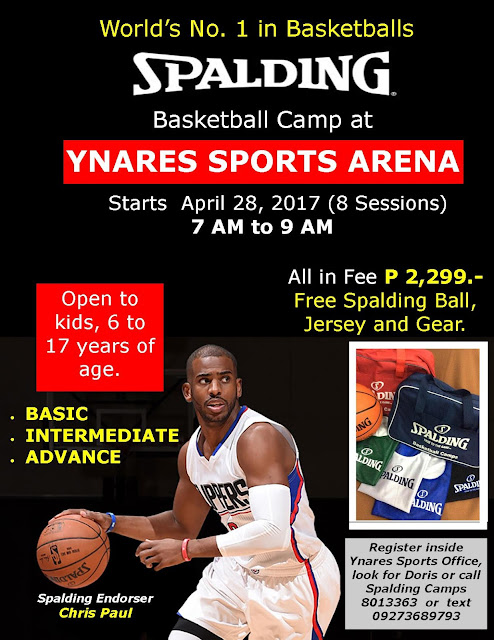 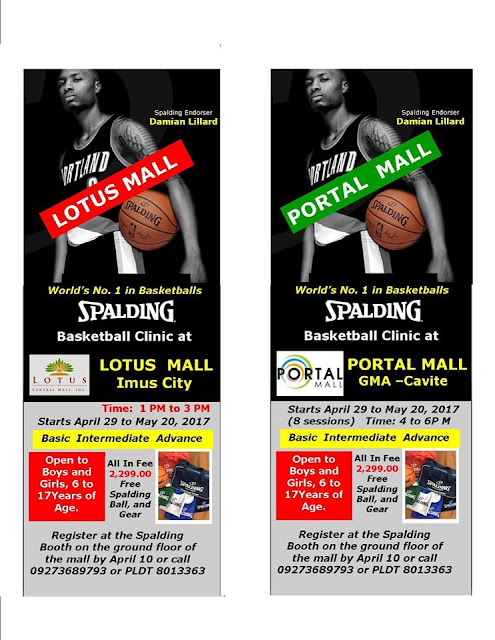 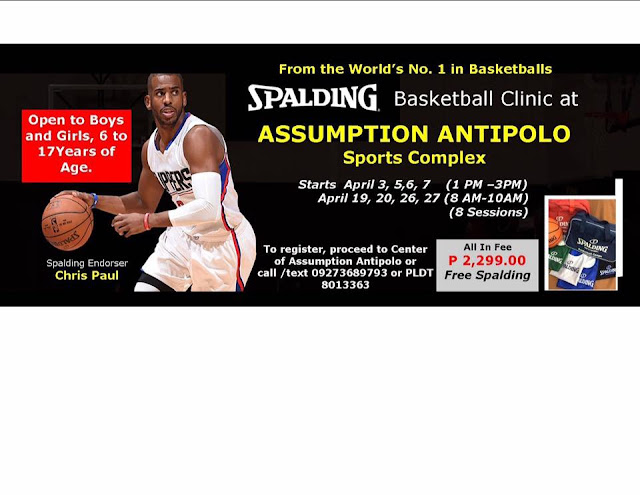 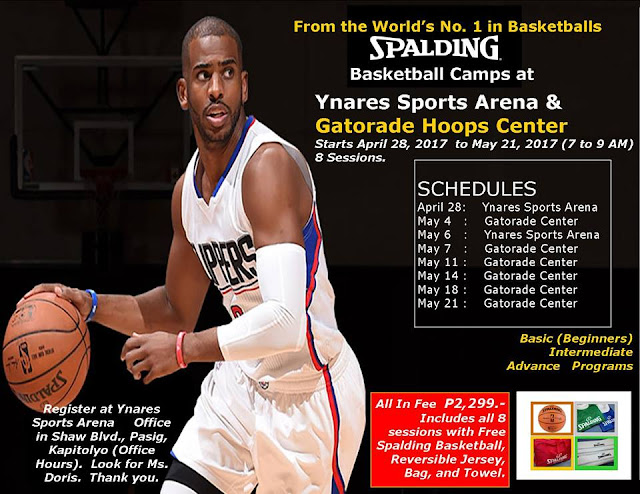 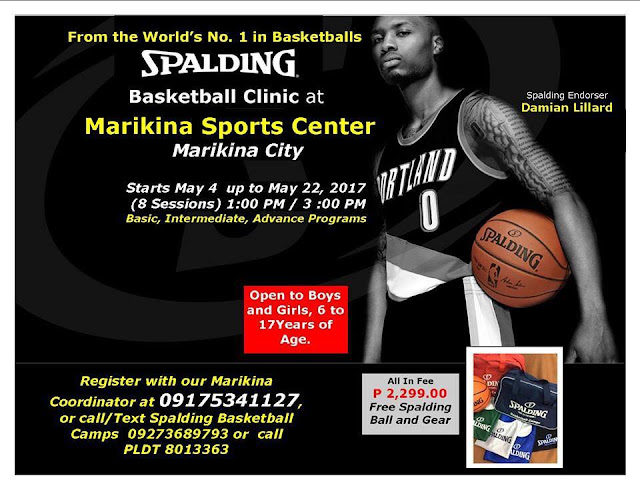 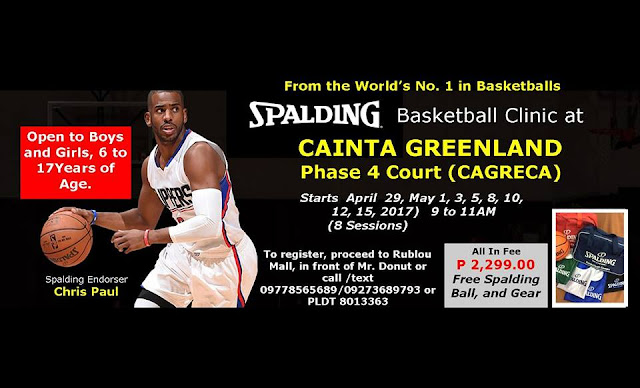 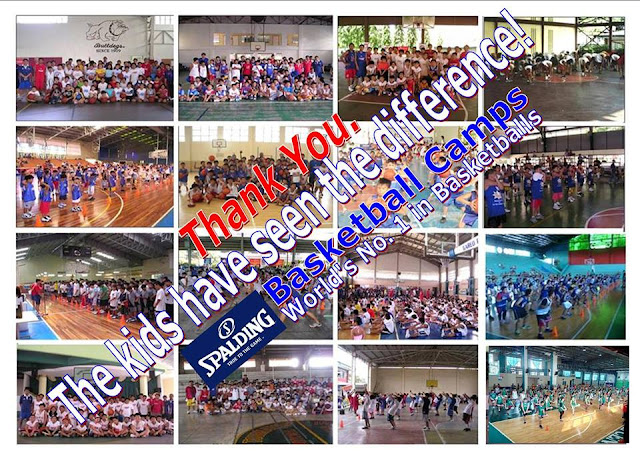 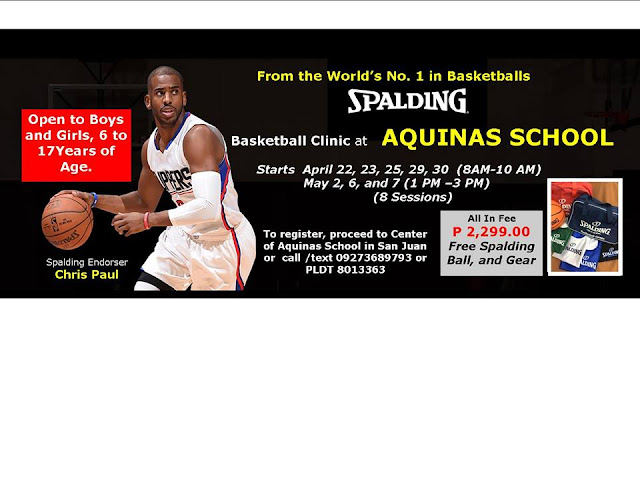 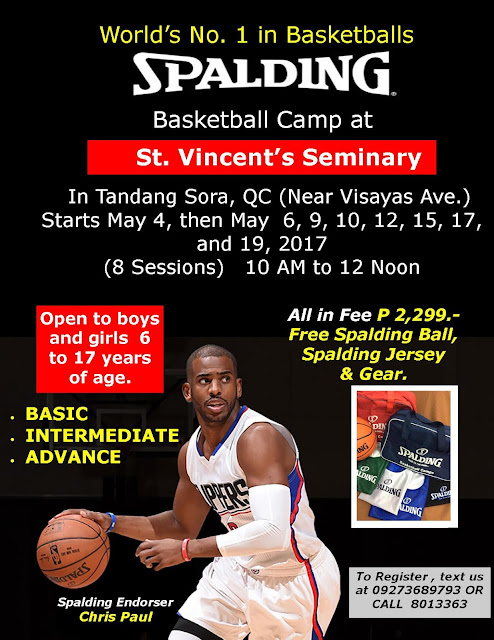 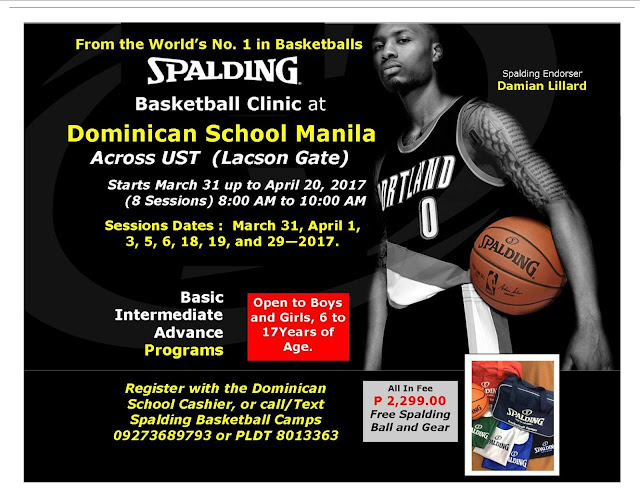 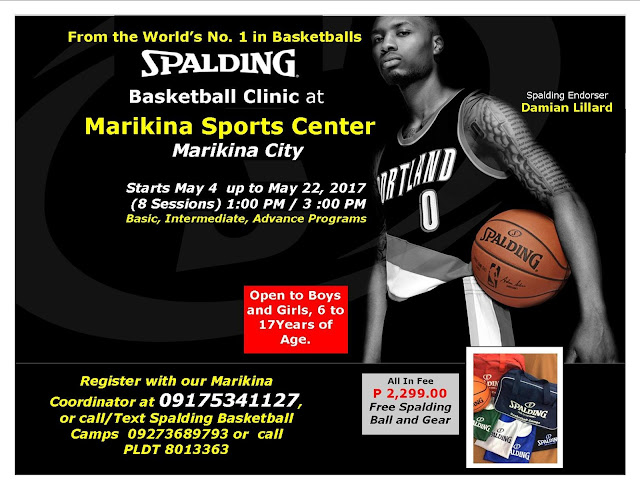 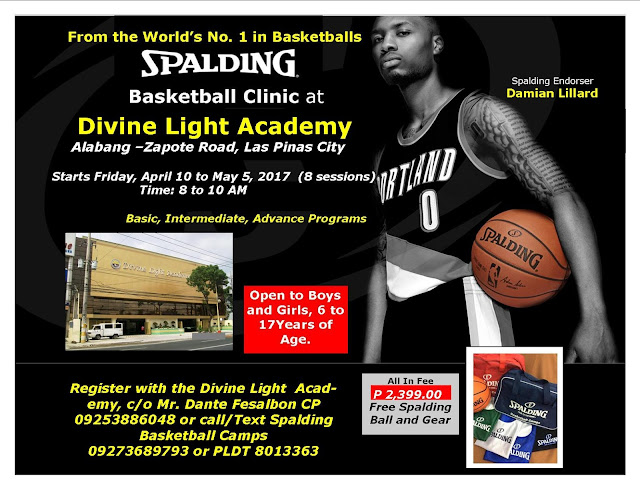 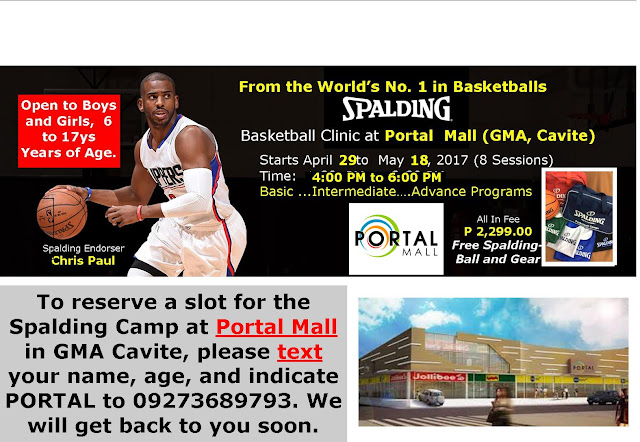 Graduated from Ateneo De Manila High School and De La Salle University in  College. Was always into sports, becoming Captain of the De La Salle's Track & Field Team and Gold Medalist in the NCAA 400 M Hurdles.  After working for Procter & Gamble and Shell for a number of years (at Shell, he was the Team Manager of Shell's professional basketball team in the PBA, helping in Shell's winning  a number of championship and runners-up finishes), he then became the Commissioner of the Philippine Basketball League.  In the PBL, he changed all the rules, logos, offices, marketing style, formats, and introduced countless innovations.  He was instrumental in introducing Fil-Ams into the league, and sent teams to several international tournaments, winning the 6th and 7th Fiba Champions Cup in Kuala Lumpur and Manila, and the Guam Friendship Cup. Even ahead of the PBA, he was the First Commissioner of any league to have an official game held in Brunei.  He was also the first PBL Commissioner  to come out with the first PBL Annual.    Today, he is the CEO/President of HOOPS SCHOOL.

Graduated at Memphis State University with the degree BS in Athletic Administration. Drafted in the second round by the NBA's Atlanta Hawks team, he opted to play in Manila, Jakarta, France, Switzerland and the other basketball leagues in the US, such as the CBA, the USBL, GBL, and the WBL.  Today, he is considered the best American player to play in the Philippines, having won the  Best Import Award, a total of seven times.  Nicknamed the "Iceman," he  never lost his cool, inspite of so many rugged plays levelled against him. Today, Bobby is active with National University where his sone Ray Ray plays, and he is likewise Assistant Coach of Petron Boosters in the PBA and Head Coach of the San Miguel Team in the Asean Basketball League.
Published: 4/15/2017 No comments:

Have you seen the "The Beauty and the Beast" movie?   We may be the last to watch on the last day and last full show  but still, it gives us  thrill  even if  we were the only viewers at almost midnight time  like we reserve a block screening.  We never missed the  magical feeling of  Disney movie.  The characters are not cartoons  but they are real actors  and you can hear them sing like you're in a theater watching a musical play.  The  film deserves musical awards maybe like  Best Score Soundtrack or Best Music Director. Music plays a very important part  like giving a boost from http://www.guitarcenter.com/MXR/M-133-Micro-Amp-Pedal-1274228082166.gc  when you're a singer and wants to add more to your craft.
Published: 4/08/2017 No comments:

When someone walked out of your life without a word of saying goodbye, you hold on, and the hope of hello never die. You deny.

Spring season has just began. It turned a little warmer than winter but the wind  unexpectedly blew hard yesterday  that the chime hanging at the door created a loud but beautiful music like someone is playing  yamaha p95  and you feel like you're being serenaded.  I love the weather so much because it is the time where flowers bloom and trees come back to life. Everything is green that my eyes feast and a walk in the park with this beautiful scene and with music  in my ear is just so relaxing. Don't you just love the  weather too?
Published: 4/01/2017 No comments: