2012 was a special year for Mead Johnson Nutrition (MJN) Philippines, the company behind top brands Lactum 3+ & 6+ and Enfakid A+. Aside from celebrating 50 years of nourishing Filipino children for the best start in life with its 50 Best Starts Project (a series of programs and initiatives for the marketplace and community), Mead Johnson also embarked on a number of trailblazing in the digital space.

Following the successful launch of the Lactum Facebook Page (now with 325k fans), MJN Philippines launched its first ever Corporate Campaign on Facebook - The Book of Best Starts.  The name is consistent with the company mission which is to nourish the world's children for the best start in life. This is a page where moms and dads alike share their children's photos of Best Starts.

The campaign on Best Stars last year appealed to proud Filipino parents who were only too happy to share their children's photos with the rest of the world. The Facebook Community developed a large following shortly after its launch, generating 55k fans in just 6 weeks. It received over 1,000 entries submitted by parents all over the country.  Mead Johnson Philippines partnered with prominent social news network, Rappler.com which created buzz in social media by driving conversation on #Best Starts. Netizens were very much engaged that the hashtag #BestStarts became a trending topic on Twitter in the Philippines.

Aimed to create awareness for the Mead Johnson Nutrition corporate brand and its mission to nourish the world's children for best start in life, The Book of Best Starts was a refreshing and creative innovation driven by MJN Philippine's Digital and Corporate Brand Equity Manager Bim Gutierrez.

The success of the campaign showcased MJN's ability  to effectively reach out to moms and dads in the digital sphere. It was also proof that more and more Filipino parents are engaged in social media, given the clamor for a re-run of the campaign. 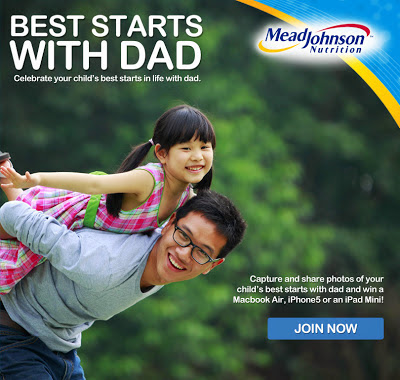 This year, Mead Johnson launches a bigger and better campaign that pays tribute to all fathers in time for Father's Day. Mead Johnson recognizes that fathers are an essential part in child's best start. Parents, moms and dads alike, can join Best Start with Dad on www.facebook.com/bookofbeststarts. All they have to do is share their best father and child photo and they can get the chance to win Apple Gadgets perfect for Dad.

There will also be a Best Starts with Dad Event on May 18 to 19, 2013 at the Grand Atrium, Shangri-La  Plaza where Mead Johnson will be giving a free photo shoot by professional photographers with free photo magnet print out for those who would like to have their photos taken for their entry.

What as the greatest lesson your dad ever taught you? Find out what the Dads from Mead Johnson Nutrition Philippines have to say on  http://www.youtube.com/watch?v=aEN7YUg_5AU&feature=player_embedded. Celebrate your #BestStartsWithDad today!