Try searching “Hamzah Marbella” on Google and chances are you’ll see an article entitled The World’s Youngest Art Prodigies (Artists who got their start when they were still in diapers). In the article, he’s mentioned in the same breath as Kieron Williamson from UK who’s touted to be the next Monet; Akiane Kammarick whose realist religious art began fetching millions when she was just 4 years old; and Wang Yani, the youngest ever artist who had a solo exhibit at the Smithsonian.

What this shows us is that Hamzah – at 12 years old— is already representing Filipino art on the global stage. 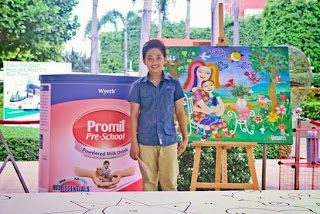 
A gift from within

And from there, the rest became history.

At the age of 5, his artwork ‘Bounty’ was auctioned off for a whopping HK$60,000 (the 3rd highest at the charity auction of the International Care Ministries (ICM) in Hong Kong – a feat considering that his work was auctioned off together with that of National Artists from all over Asia.

Besides being a proud recipient and receiver of more than fifty national and international accolades and awards including Special Citation from the National Commission for Culture, an Outstanding Artist Award and the Arts (NCCA) and a Certificate of Recognition at the UN International Children’s Art Competition, Hamzah is the youngest member of the Artists Association of the Philippines. He has produced approximately 300 artworks, some of which have been featured at the Asian exhibitions and have been appeared at the United Nations headquarters in New York City.

It’s a little known fact that Hamzah actually has a photographic memory and that he translates the everyday things he encounters into striking works of art. “Dito sa amin sa Cavite, maraming nagtitinda ng isda – may mga naglalako, yung iba naka-kariton (Here in Cavite, there are a lot of fishes sold on the streets, some in crates),” shares his father in explaining the predominantly pastoral setting in Hamzah’s art. Fisher folk with cats, fish, flowers and Hamzah’s signature image of the sun, prompt art lovers to enter Hamzah’s wonderful visualization of the world. In his own words, Hamzah shares: “sa painting nasasabi ng kamay ko ang hindi nasasabi ng bibig ko (with paintings, my hands are able to say things that my mouth can’t).”

With its long-standing thrust of encouraging Filipino children who have exceptional talent, Promil Pre-School recognized Hamzah as an Outstanding Child Artist in an event held at the Activity Pods 1 and 2 of Bonifacio Highstreet in Taguig. Hamzah will be joining fellow painter CJ de Silva and a select group of exceptionally talented children, all of which are walking testaments not only of Filipino talent, but of the Promil Pre-School heritage in nurturing gifts as well.


During the event, attendees experienced Hamzah’s artistic world firsthand by joining him in painting the biggest children’s collaborative masterpiece. Meanwhile, Wyeth Leadership team painted alongside Hamzah himself, CJ de Silva, Promil Pre-School i-Shine Talent Camp 2 host Dimples Romana and her husband Boyet Ahmee. This first co-created, hand-painted masterpiece will be displayed in different venues in the metro. First stop will be at the left entrance of Eastwood Mall Open Park in Quezon City, starting November 11 to November 24, 2013. For details on the next venues, visit Promil Pre-School’s Facebook fan page.

“We’re glad that parents continue to take an active role in developing their children’s gifts to excellence. Through Hamzah’s story and his achievements, we hope to inspire and encourage even more Filipino parents to nurture their children’s talents,” says Rhea Villareal, Promil Pre-School Product Manager, Wyeth Nutrition. “We hope that by recognizing Hamzah, we can continue to inspire a new generation to develop their talent and potential towards excellence.” 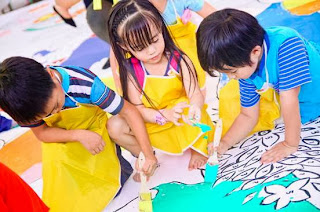