Yellow Warning for Metro due to Storm Gener

Storm Gener is getting stronger as it hits Western and Northern Luzon. Tweet from  ANC:  for 10pm advisory: Yellow warning for Metro with moderate to heavy rains to continue for the next 3 hours. Floods possible.

I just hope that there is no flood because of possible landslide in some low lying areas. There is no storm signal in Metro Manila but the wind started to blow stronger. I could feel the wind   as it  closed  the door by itself  with a big bang.  As of 11:20pm, classes in many cities in Metro Manila are suspended.   DepEd also announced suspension of classes in Manila  tomorrow  from Kinder to HS. 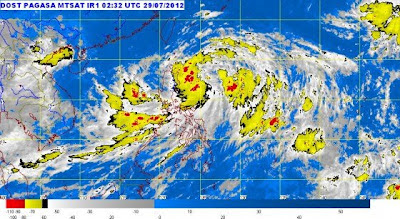 Gener  will bring  heavy rain  as the storm is  expected  to enhance  the Southwest Monsoon.

Binga, Magat and Caliraya Dams are now on spilling level.

What to do during the typhoon:

Stay indoors and watch TV or online news for weather update.
Have a flashlight and radio with battery in case  there is power interruption.
Have enough supply of food and water.
In case of flooding, turn off the main switch and gas.