MANILA, July 24, 2012 – Miami Heat Head Coach Erik Spoelstra is headed back to the Philippines this summer, the National Basketball Association (NBA) announced today. Spoelstra will be in Manila from August 2 to 5 for the NBA Trophy Tour presented by Gatorade. 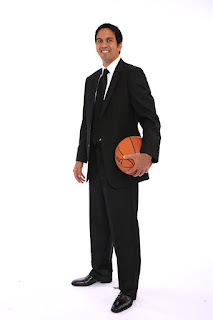 Coach Erik Spoelstra led the Miami Heat to the 2012 NBA Championship and became the first ever Head Coach of Asian descent or heritage to win an NBA Championship. He returns to the Philippines next month for the third time with the NBA and its partners.

Following a press conference on August 2, the NBA Trophy Tour presented by Gatorade will take place at SM North Edsa on Saturday August 4 (The Block Atrium, 2 – 3pm), SM Megamall on Sunday August 5 (Event Center, 2:30 – 3:30pm) followed by SM Mall of Asia (MOA) on the same day (Music Hall, 4:30 – 5:30pm). Fans will be able to get up close to the Larry O’Brien Championship Trophy and see Coach Spoelstra as he makes an appearance and chats with fans. During his visit, Spoelstra will also conduct an NBA 3X Clinic for teen boys and girls at the Jose Rizal University on August 2 in preparation for NBA 3X that will take place at the SM MOA from August 17 – 19.

As part of his trip to Manila, Spoelstra will host an interactive viewing party at the SM MOA Center Stage, where the NBA will air an NBA Finals game and fans will be treated to a once-in-a-lifetime viewing experience. The NBA Finals game will be shown on the large movie screen while Spoelstra provides his personal commentary, insights, and inside information about the game. Fans will also get a chance to interact with Spoelstra and ask questions during the viewing party. To determine which game will be aired, fans can log onto the NBA Philippines Facebook page at www.facebook.com/philsnba and vote for either Game 3 or 4 of the NBA Finals. Voting will run from July 27 – August 2. Voters are encouraged to share the poll with their Facebook friends and 20 lucky voters who do so will win a pair of tickets each to the interactive viewing party.

The NBA is a global sports and media business that features three professional sports leagues: the National Basketball Association, the Women’s National Basketball Association, and the NBA Development League. The league has established a major international presence, with offices in 15 markets worldwide, games and programming in 215 countries and territories in 47 languages, and NBA merchandise for sale in more than 125,000 stores in 100 countries on six continents. Current NBA rosters feature 78 international players from 39 countries and territories. The NBA’s digital assets include NBA TV, which is available in nearly 60 million U.S. homes, and NBA.com, which averages more than 35 million page views per day, more than half of which originate from outside of North America. The NBA is the No. 1 professional sports league on social media, with more than 240 million fans and followers globally across all league, team, and player platforms. Through NBA Cares, the league and its teams and players have donated more than $190 million to charity, completed more than 1.9 million hours of hands-on community service, and created more than 700 places where kids and families can live, learn, or play.