Dolphy, The King of Comedy dies at the age of 83 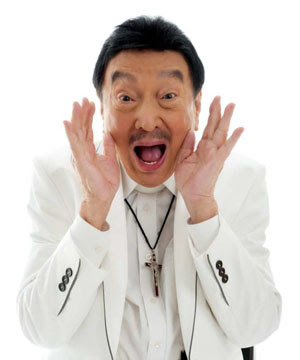 but the laughter will live forever!  Thank you for the memories and laughters, Dolphy!

I  received some text messages  awhile  ago asking confirmation  if   Dolphy is dead.  I couldn't  confirm  at once because I watched the news earlier  and  his  family  said  that   Dolphy's  condition was getting better and  he was responding well to the treatment. His son  Eric said that his father may be transferred to a  regular room once   the dialysis and blood transfusion were done, an indication that Dolphy was really getting better..     The news all over the net surprised me and I couldn't   believe it  until   I switched  the TV on and the  news from ABS-CBN just confirmed  that the king of comedy  has passed away.


Dolphy  died  at the age of 83.  The  whole nation is praying for his soul.  He played different characters and served as inspiration to many.  Among the many characters  that he played on,  it's   his  role  as  John Puruntong     from the  TV show  "John  and Marsha"  that   made a big mark on TV  and touched the lives of many people.