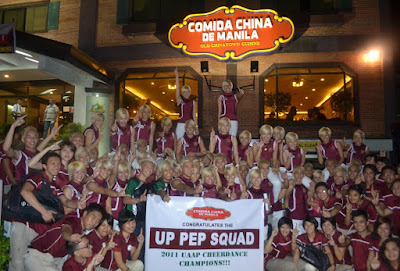 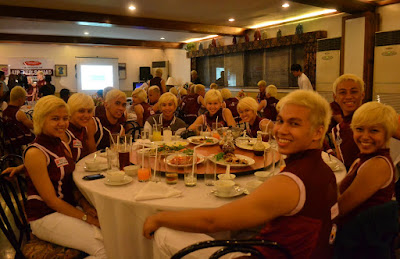 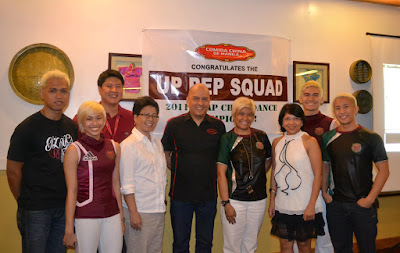 The “UP Pep” was accompanied at the dinner by UP College of Human Kinetics Dean Leilani Gonzalo, former Vice Chancellor for Community Affairs Grace Gregorio, head coach Lalaine (Coach Lala) Pereña and assistant coaches NJ Antonio and Pio Niño Opinaldo.
The UP Pep won first place in the prestigious Samsung Cheerdance Competition on September 17 in back-to-back fashion, now bringing their title total to 7, just one crown away from the University of Santo Tomas with 8. At the same competition, the UP Pep Squad took home all the other awards to be won : the first crown of the inaugural Samsung Group Stunts Competition and the Samsung Stunner of the Day title, care of “blonde” looker Nezsa Salvador.

The platinum blonde look was the peg for the Pep Squad’s Madonna-inspired number that was “crisp, athletic and creative, with trademark throws and athletic moves” that was pure UP Pep Squad.
Comida China, (owned by the Torres Family who also run Mom and Tina Bakery Cafe and the Red Rickshaw in San Fernando, Pampanga), pulled off all the stops in paying tribute to the back-to-back champs. “Such a significant achievement deserves to be celebrated with a full-course Chinese lauriat,” said Comida China de Manila president Benny V. Torres. 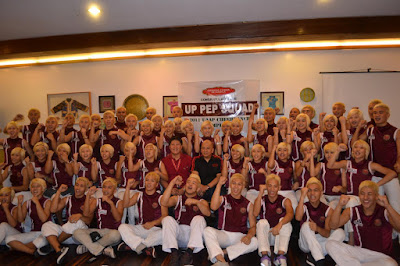 “We always strive for excellence in our food and service, that is why we salute the excellence that the UP Pep Squad showed in their performance last Saturday. Their commitment and discipline inspires us to always do our best in all that we do. We are happy to honor them with this dinner, as they honor us here with their presence,” said Benny Torres, who said the tradition of celebrating triumphs and victories invites more triumphs and victories.
After some sampling of cheers and lifts for the benefit of the media present, the UP Pep thanked everyone for their support and pledged to come back next year with something better than their best. They also invited everyone to support them in their next adventure : the 6th Cheerleading World Championship in Hong Kong on November 26-27 where the UP Pep Squad hopes to bring honor not just to UP but to the entire country.

“We hope the event will help introduce and recognize the Philippines more in international cheerleading events and showcase our Filipino cheerleaders as well. It is truly an honor for us to be part of the very first Philippine cheering squad to represent our country in a world cheerleading event,” Coach Lala said.