In celebration of International Women's Day, an Independent Film "Ganap na Babae" had its special screening at UP Diliman Film Center last night. It was a privilege for me to watch a movie like this that tackles different issues of women.

Ganap na BABAE is directed by women directors namely Rica Arevalo, Ellen Ramos and Sarah Roxas. This is a trilogy about three women in different roles; a prostitute, two sisters, and a widow.

In "Ina" episode, a woman (Mercedes Cabral) shares her soul as a prostitute in front of the camera. A survivor, she looks back at her life as a mother. Milagros (Sue Prado) and Elena (Jam Pérez) "Kapatid" are sisters tilling camote (sweet potato) in a dry land. Poverty provokes Elena to migrate as a mail-order bride in Japan while Milagros stays to take care of the family. Eos (Boots Anson Roa) in "Kaibigan" is a widow who falls in love with a younger man, Rodrigo (Rome Mallari). They try to make the relationship work amidst the pressure of their family and the society. Happy International Women's Day! 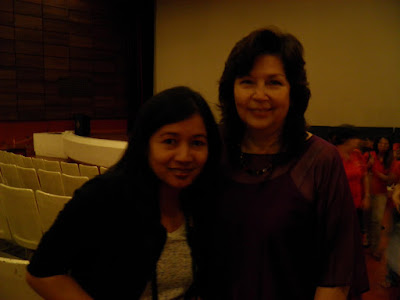 Photo op with Boots Ansons Roa. She played the role of Eos in "Kaibigan" episode.
Published: 3/09/2011