Mitoy Yonting joins The Voice of the Philippines


We were on our way home from Cocina Centrale grand opening while "The Voice" was being aired on TV.   I wanted to be home early to watch the show  because  Mitoy Yonting  was one of the auditionees  that day. Unfortunately,   the departure time  from Pampanga  was delayed.   Anyways,  I knew that I could watch the show online anytime I want anyway.  Luckily,  a blogger who was seated next  to me had his mobile TV on  and  I was able to watch and listen  to  all the auditionees as if I was one of the coaches in this  blind audition.   My sister who is  also a fan of  "The Voice"  sent  me  updates of  the show via SMS too.

Immediately,  Lea Salonga turned her chair after a few seconds  of   Mitoy's audition.  Bamboo, later turned his chair too.  Lea  was overwhelmed of  Mitoy's voice and cursed in a way that she was carried away and  showed how she admired Mitoy's voice by which she described as a  "laser."   The two coaches convinced  Mitoy  to be in their own  team but  in the end,  Lea won.    Mitoy  now belongs to  #TeamLea.

Yonting is a member of local band,   Drayber's Band and performed with his own rendition of  Didith Reyes',  "Bakit ako Mahihiya."  during the audition.

As of  this posting,  his performance on  YouTube  already  earned  200k++  views and counting.

Check his "The Voice" audition   here. 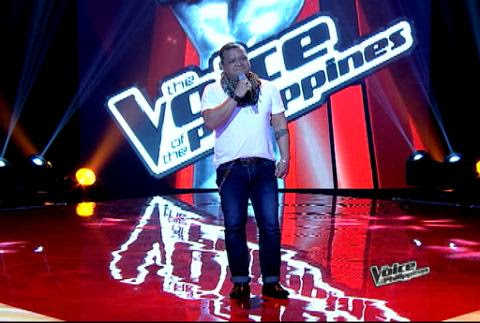