First off, thank you Jeman of www.orangemagazinetv.com for the opportunity to be part of this meet-up. Last Thursday, bloggers were given a chance to ask Senator Gringo Honasan everything about political and personal life. Honestly, I just know a little about politics. Good thing the topic did not focus much about it, only few of the current issues. Other bloggers threw some ice breaking questions and the conversation went on smoothly with few good laughs from time to time. Senator Honasan answered the questions spontaneously except for one question about women in the past and jokingly said “I invoke my right to self incrimination.” He said, "stop trying to understand women, instead love them unconditionally. " I guess we will all live in a peaceful and loving relationship if all men have the same view as the senator.

In that few hours meet up, I've learned a few things about the senator. He works silently behind camera and accomplished a lot on his own. He works productively for the country. For all of us to know, Senator Gringo Honasan was a National Champion in Wrestling and Combat Shooting. He was also an ASEAN Champion in Skydiving.

It was a light talk, more on the personal life of one senator, what a typical day like to him and the legacy he will pass on to the next generation.

At 63, Senator Honasan is still active in his life. And how does a day in his life starts?
He wakes up at 6am and does his daily ritual by freshening up, jogging, and praying to God and thanking Him for waking him up. He asks forgiveness for his transgression and his weaknesses, and strengths for burdens that he's bound to carry as a public servant as a father, as a grandfather and as a husband. And in the evening, he tries to squeeze in some exercise because he is bothered about being overweight which he said was not good for one senior citizen.

What's the happiest day in his life? Getting married, having children and having grandchildren are the most unforgettable happy days in his life. 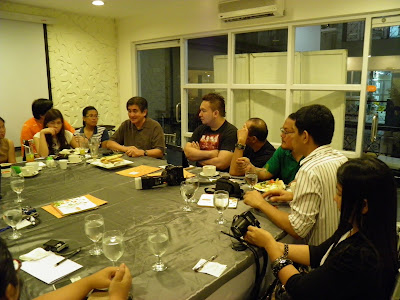 He likes reading, watching movies and the last movie he watched was "Transformer". He also paints, carves, and do bonsai gardening for personal satisfaction.

He added that in most part of their married life, his wife has been the father and mother to their children and his wife is stronger than him psychologically and has endured a lot that's why he's vulnerable in their lives. He said that the security of his family is very important to him and that's the reason why he always tries to maintain and manage their anonymity so that their security will not be jeopardized, not for his own benefit, because if anything happens to them, he will run after anybody who is responsible. He can take criticism and other personal issues but not his family, his friends and country.

When asked about his favorite local artist, he mentioned Piolo Pascual. He said that he used to think that Piolo Pascual was just a handsome face but not until he heard Piolo singing. He added in a half-humorous tone that it's unfair for all of us. For this guy to be given good looks, talent and yet the nature endowed him a beautiful singing voice. He added that maybe he was raised there during these times to provide us with a beacon of life and an example that our capability can actually achieve our potentials. When asked if Piolo would be a good candidate to play for his role in the movie, he said that it would be a self indulging and we all smiled in his witty answer. He would rather write a book so that the generations can read that once upon a time there's a group of young idealistic soldiers who were willing to risk their lives and give it up if necessary for the country. 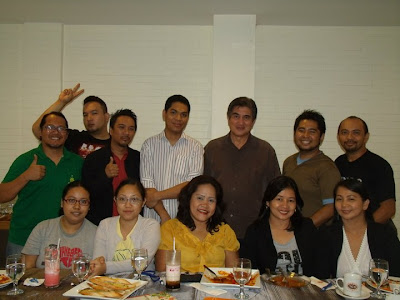 I kept listening to his words of wisdom that he shared to us especially when I heard him said that our country is so beautiful and we are such a good people and he would not have risked his life over and over again if not, and he's not doing it for himself but for future generation.

When asked what part of the country would he campaign to promote tourism, swimming with the huge Butandings at Donsol is one great adventure that one has to experience.

I actually saw my father in him seeing one principled man in front of us, bloggers. I suddenly missed my father. There's always a spark in his eyes whenever his grandchildren were brought up in the topic. He is one good senator that I never could have imagined. There are so many things I have to be thankful to Senator Honasan. He opened my eyes on a larger perspective and how to become a productive citizen of the country. Thank you, Senator!

That dinner/meet-up was one great experience I've ever had and I will always carry his words of wisdom for the rest of my life. 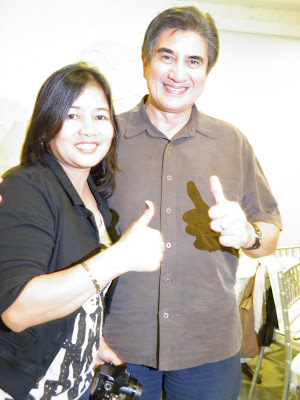 Thumbs up to you Senator!