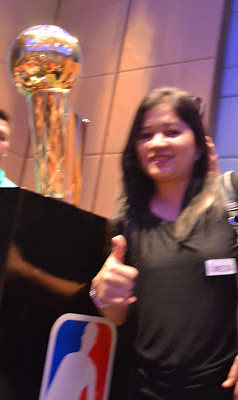 The trophy at my back is an NBA's Larry O'Brien Trophy.  During the press con, Coach Erik Spoelstra said that his luggage was a bit heavier at his fifth visit to the Philippines because of this trophy. The security team kept  reminding us not to touch    the golden championship trophy.  It was an amazing experience to have been in the press con, even if it's not a one on one interview with the champion coach. Filipinos are indeed blessed to have Coach Erik Spoelstra,  who,  inspite  of  his current status,  is still  proud  of  his  Filipino heritage.
Published: 8/04/2012