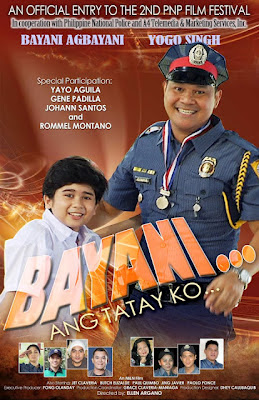 Filipinos are noted to have a very significant and positive attitude in handling difficulties in life. Others may also treat their predicaments in sort of “cool” manners, which the Pinoys are really known for. M&N Films have come up with a brilliant idea of ideally showing to the public the film “Bayani Ang Tatay Ko.” An indie film about life, its struggles... it’s about presenting life’s most vivid moments with the people we love. This film not only wishes to instill family values but also provide entertainment and at the same time honors the law enforcers.

Actor-comedian and host Bayani Agbayani plays SPO3 Nicanor Corpuz , a decorated cop, loving dad and husband to his wife Susan played by Yayo Aguila, and son, Adrian played by child actor Yogo Singh. They live a simple, happy life until an incident took their lives on a different turn. One morning while in the police detachment where he is working, Taning played by Rommel Montano, a toughie from an influential family came looking for his colleague, SPO1 Joey Ponce. Ponce apparently shut down his illegal “videokarera” business and refused to accept a bribe, making the latter furious. Taning was scandalizing the station so he took a policewoman, SPO2 Pinky Madrigal hostage prompting Nick to defend his colleague.

Nick was suspended from service and he turned to selling “isaw” to make ends meet. Failing to do so, his wife Susan decided to go to Hongkong to work as a domestic helper. To help him in his business, Susan sent his brother, Ading played by Gene Padilla to help Nick tend to the isaw business. But the former cop realized that he is not cut for business, so he asked for his ninong, Col. Roberto Ugarte to give him an assignment. Colonel Ugarte referred him to the city hall where he worked as a traffic enforcer. As a traffic enforcer, Nick has learned to be happy with his new job because he wears a uniform and arrests violators. It was at this time when he was informed that his colleague, Ponce has remained missing since the precinct incident; SPO1 Fernandez had been looking for him. Worse, his wife Susan called to tell him she was victimized by an illegal recruiter.

All these tribulations that had happened to Nick and his family occurred very untimely. Witness how will a typical Filipino family face these challenges in a comedic and a bit of dramatic way with a sting of action to highlight the story.

Joining the lead stars are actor/model and ex-PBB housemate, Johann Santos, Ms. Jet Claveria, Butch Elizalde, Pinoy T.A.L.K. host Paul Quimbo,  Ms. Jing Javier and Paulo Ponce and is under the helm of Ellen Argano. “Bayani...Ang Tatay Ko...” is one of the official entries to the 2nd PNP Film Festival and subsequently, the awarding will take place at the Philippine International Convention Center (PICC) on August 7, 2012.

Being a policeman is indeed a heroic profession; it is both a difficult and extensive task enabling continuous protection of the public and their property as well as maintaining law and order. Preventing crime, reducing its fear and ensuring the improvement of every citizen’s quality of life are no way an easy job. So let us all salute the gentle officers... the all-time “bayani” of every community.

“Bayani...Ang Tatay Ko...” will have its premiere showing on August 5, 2012, Sunday at SM North Edsa Cinema 5, 5:00- 6:30 PM. Please be guided for further announcements and updates of the movie’s scheduled screenings in various theaters nationwide. For the movie's block screening and sponsorship matters, please contact Ms. Nanette or Grace at these numbers: 425-1658 and 0915-8170505