Bradley  himself didn't even  believe  that he won  but  I want to congratulate him anyway!      I  heard a rematch?   That was too quick,  a  few seconds  he was announced as the winner.   That's the business of  the  game.  Definitely, a game, not a sport.

Pacquiao  could  have  beaten Bradley,  and the result  would  have been cleared  if  the game was finished  by  a TKO. 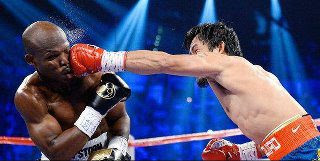 I was a bit disappointed when  Jessica Sanchez sang the U.S. national anthem.   I knew that she is an American girl but she  has the blood of  Pinoy.   To hear  Jessica sang  the US  national anthem  in  Pacquaio's  fight,  where millions  all over the world were watching,  was something not really pleasant to my ears.  She nailed it but I was not proud at all.   Okay,  she  is  an  American,  but  she should  have  given the Star Spangled Banner  number  to Phillip Phillips.
Photo source: internet
Published: 6/10/2012