With its Post-it® and Scotch® Brands, 3M Philippines supports youth creativity and self-expression by partnering with Make Believe Productions in this year’s summer workshops for kids.

“This fun and engaging initiative of 3M Philippines with Make Believe Productions aims to build a relationship with the children while they are enjoying their talents in creating stories, visuals, crafts with the help of Post-it® and Scotch® products. We are more than happy to come on board and to be part of these children’s creative lives,” says Ms. Haydee Casapao, Stationery Products and Office Supplies Division Head of 3M Philippines.

During the workshops, the kids were provided with Post-it® and Scotch® Products such as the newest Scotch™ Kid’s Scissors, Post-it® Page Markers Ultra Colors, Scotch® Magic™ Tapes with Cool Color Dispensers, Scotch® Glue Sticks and many more.

All products are already out in leading bookstores and office supplies stores. 3M, Scotch® and Post-it® are trademarks of 3M. 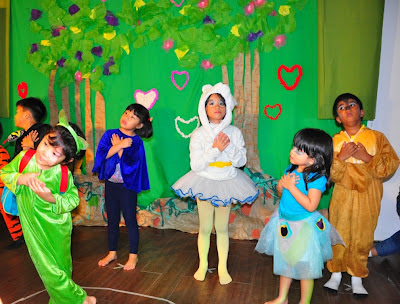 In photo: Kids of Make Believe Productions act out as animal characters during their culminating activity to showcase their talents in acting, singing and dancing

3M captures the spark of new ideas and transforms them into thousands of ingenious products. Our culture of creative collaboration inspires a never-ending stream of powerful technologies that make life better. 3M is the innovation company that never stops inventing. With $30 billion in sales, 3M employs 84,000 people worldwide and has operations in more than 65 countries.

Make Believe Productions is a creative center that aims to nurture the natural creativity of the youth most especially kids at an early age through the use of mixed media arts.