Let us all pray for all those affected by super typhoon, "Yolanda"  as  almost ten regions of the nation were affected and some areas were totally devastated  by  the typhoon.

Scary. Unimaginable  as I watched the footage of the aftermath of  "Yolanda",  the strongest typhoon ever landed on the history.  I saw some videos that  were unedited,  just bit blurred  for scenes that are sensitive for viewers. Dead bodies lying on the street, evacuation areas that  should have been the safest area were  also hit and some evacuees were feared to have been drowned.   A wounded woman running on a completely wiped out city looking for her child that slipped off her hand on the midst of the storm, and her siblings and parents feared to have been dead is totally  a heartbreaking scene.   Scary, devastating.   This  is just in one city, Tacloban,  where "Yolanda" made a landfall.  I couldn't imagine  the aftermath in other cities  slashed  by storm signal number 4.

As  of  yet,  the roads connecting to airport (airport was even washed out)  are completely blocked.  Communication lines are still down. Media and other agencies only way to reach the areas is  by private helicopter,  same with video feeds  only via the nearest city with satellite.

PAGASA released a weather bulletin at 3:30 pm that Typhoon "Yolanda" is now outside the Philippine Area of Responsibility (PAR.)  Share, donate and pray for all the victims of the typhoon. 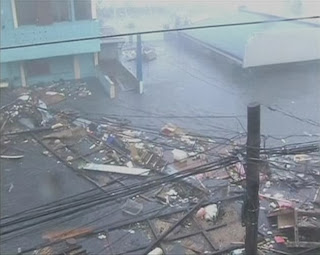 One of the photos of Yolanda aftermath.  Debris float on a flooded road. Photo by Reuters/TVReuters