Nurturing a Child’s Talent to Excellence

Among the many delights of a parent is discovering and nurturing the inherent talents of their children. Simply having talent however, will not automatically translate to success; It has to be developed—something the parents of Promil Pre-School’s Top i-Shiners know about. 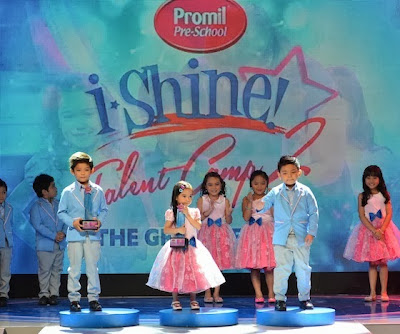 For Nathan John Bautista, who became the Top i-Shiner for singing at Promil pre-School’s recently concluded i-Shine Talent Camp 2, standing out was a matter of having the confidence to share his natural talents.

“As a mother to Nathan, my vital role is to be a supportive, loving and caring mother. It’s important to nurture him physically, mentally and spiritually so we can bring the best out of him,” says Ednorlyn Bautista, mother of Nathan.

“This experience helped not only in nurturing Nathan’s singing skills, but contributed a lot in developing a closer relationship between me and my son,” she ends.

Dancing to the Top

The same sentiments ring true for the parents of i-Shiner, Jan Michael Andres, or JM for short, who was recognized for his dancing skills at the young age of 7, and became the Top i-Shiner for dancing.

In JM’s quest to become a talented dancer, his parents wholeheartedly gave their support when he expressed interest in joining Promil Pre-School’s i-Shine Talent Camp 2. As parents, it was important for them to be behind JM’s goal, empower his talent and believe that he can be the best.

“An exceptionally talented child is one that exceeds others by virtue of what they can do. In Yesha’s case, it was her talent to recite the Desiderata before she learned how to read,” the mother of our top i-Shiner for acting and grand i-Shiner, Yesha Camile, fondly recalls.

“This experience boosted her confidence and gave her an opportunity to work with individuals who could do a lot towards her growth,” she adds.

Truly, the right nutrition and the guidance of these children’s mothers played an important role in their talent development; proving that a mother’s support goes a long way in nurturing a child’s gift to excellence.