So I only knew it today that I don't have list of emergency numbers in our house. Fire, Police, Hospital, etc.

Just this morning, when I was about to fetch my daughter from school, I was surprised to see my neighborhood in panic because the house near to us was on fire. I saw my neighbor with wireless phone outside and calling fire station. I hurriedly went inside our house and checked the fire department and found out that I don't have it in my emergency list too.

There's a firewall in the house next to us that even the smoke hardly find its way out. But it was my business, oh yes, my business, it's my neighbor, and their house was on fire. 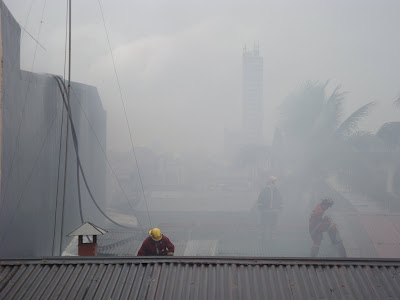 This was taken at the 3rd floor. I went upstairs to see a closer look and saw the firemen readied themselves, armed with firehose and stairs and other tools to stop the fire. Only one thing was on my mind, put valuables in one bag including documents. I got the house keys, unplugged everything and locked the house.

When I went outside, there were already about 20 firetrucks on standby. I salute the firefighters performing their job. I'd say true heroes to risk their lives. 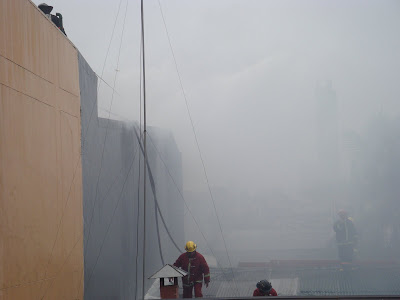 After about 40minutes, fire out was declared. The owner of the house who just left five minutes after the incident, was surprised when she came back to see their house burned and est 3.4 million pesos damaged in span of 40 minutes. Cause of fire: She forgot to unplug the celfone and overcharging was first pointed out as the cause of explosion that turned to a big fire.

March is Fire Prevention Month. Let's all be alert and take safety measures when leaving the house. Switch off all appliances, gas stove, and do not overcharged celfones or any other e-gadgets. A reminder including myself, to keep emergency numbers posted and visible in your house.