When Poptalk invited me to be a guest reviewer I  was  hesitant to accept it at first. I  am a kind of  person who would rather write than talk,   keep silent than shout out.  That explains why I  blog  a lot  to express myself.  I have a fear  of  talking  in  front  of  the  crowd.. I  seldom post  a photo of  myself  even  in my own site because  I am  very conscious of  my  look.  Opportunity  only   knocks once so  I  grabbed  the chance because not  everyone  is  offered  to be a guest reviewer  anyway.   I  believe I can make it  just  like how I did  when   I conquered  my  greatest fear,  jumped off the cave  and dived.   I  wouldn't know  my  capability  unless  I try  it.    It's a review anyway that even the kids can tell how  they  taste  the food whether delicious,  sweet,  salty or  whatever adjective  they can describe it.   I know  it would be easy  for me.  I've attended  a  lot  of  events,  tasted  a lot  of   food,   blogged about my  food  review,  so this would  be  easy  peasy   for  me.

But  it was  a different story,   far from my thoughts.  When the camera started rolling,  I  was blanketed with shyness. I thought  that the less I  speak,  the less mistake I would make. I was not at my best.   I gave my own  insight and shared my  input but I should have said a lot more.

In our  first  restaurant location,   I already noticed the chart  menu  that  says.. No MSG,  No artificial flavoring, No food coloring..etc. and  thought this is  what  I always look for  as  part of   my review.  But  when the camera started to roll,  I couldn't tell anything  about  it and said  other point instead.  Okay,  things like these  really happen sometimes.  I was  like dosed up  with a lot of caffeine in my body.   I  was bit nervous.

Yes, I enjoyed a lot albeit stressful in front of camera. It was my  first time and everything was impromptu.  There is no script to read,  no drama, no director to tell me what to do.   Just on the spot review!

My first experience to share the camera with celebrities  was overwhelming.  I am waiting till the airing time of the  episode.   I guess I will loose a lot of pounds on my weight  for that  waiting  period  anticipating  how  I  would  look on TV during  the verdict more so,  figuring out what I actually said during the food chat.  Though I know  I wouldn't have the same  exposure,  I was there as part of the episode  and  a glimpse of  me on the camera  would mean  a whole  lot  to me.   The host,  KUYA TONIPET  is  very articulate and spontaneous.  He's  really  a good host!  And by the way,  he's more handsome off  screen.   than on TV.


Other reviewers  are  Carl Guevara, a  model and actor of   GMA and  Nadia Lei Macaya, a student and  fashion enthusiast. 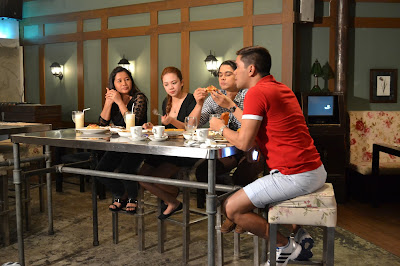 All the staff of   POPTALK were all kind to me especially the Segment Producer   who's very accommodating.  At the end of the taping she asked me if I  enjoyed  the experience and I said  yes, a  lot   but   I  am  sure  though,  a very  uncomfortable  me  would  register on the screen.  After all the nervousness and awkwardness,  it's the experience that counts.  For once in my life, I've guested on TV.

Mamarhaye,   GMA's  Make up Artist,  was so kind for keeping me look good  during the entire taping.  You're the  best   Mamarhaye!  See the transformation of  myself when aired,  at least at  this  point,   I  pop. Haha.   Yes!   I was totally pampered  with all the retouch  during the taping.  Thank you so much Mamarhaye.


This is it for now.  I will post a lot  more later.  The photos above were taken by my friend Joy Mendiola who was  there with me during the taping.  I  know this is just a very quick appearance and I sounded like I am launching a movie,  but  hey,   this  is such  A  BIGGIE  MEAL  thing  for  me.

My  POPTALK  review is posted   here.