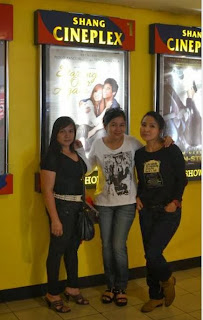 It was Tuesday, March 4,   the last day of "Starting Over Again movie at Shang Cineplex.  My mind debated whether to  watch the  movie or not. I thought of just attending 6pm event but my protesting  feet  led me to Papa Piolo,  err to Shangrila   to meet   Joy.   Before we (Lyn and I)  reach the place,  she already bought a ticket for herself,  determined to watch  alone  if ever we didn't  push  the movie date.  The film  was about to pull out that day so we got no choice but to catch the last showing day.  According to the news, three weeks since it was released in theaters, the movie already earned P375 million.


“Starting Over Again” is not the usual story with  "live happily ever after"   ending.  It just  perfectly made for Piolo Pascual and Toni Gonzaga.    I couldn't imagine the story if they  end up together.  It's a romantic comedy  movie where I found myself laughing in most of the scenes.

There were only a few viewers in the  theater. I can count them in my fingers.  What would you expect in  almost a month showing.

"I love you Piolo." This is where Toni got noticed in a soft drink commercial in 2001. In this movie,  Toni (as Ginny) shouts, "I love you, Sir Marco!"


Piolo Pascual and Toni Gonzaga play Marco and Ginny.   Marco  is a History Professor while Ginny is an Architect  student.  They met in a university  and everything went well until one day, Ginny decided to leave for Barcelona leaving Marco alone and  confused.

"I almost died and everyday, I wish I'm dead." - Marco

Four years after, Ginny received a letter  from Marco through letterlater, (scheduled mail)   which was written on the day she left.   When Ginny came back to the Philippines, she held on to the words  "I won't lose hope" and that kept her to  pursue again Marco hoping to  rekindle the past.

The story is beyond what a typical movie ends.  If you want a full story,  please watch (soon to be released on DVD or can be downloaded?)  and  know  the meaning of "closure."  That's what I remembered well in the movie.


Rating.   I can't give a perfect score  because there are some scenes while Ginny was chasing Marco over Metro that I don't like. It  is just fair to give 4/5   and  the price for  the  tickets are just  worth  it considering we almost own the cinema for block screening. :)