One Cause, One Fight for Junbert

Junbert Robiso was featured in many shows,  one of those are in #KMJS. Their love story become a trend in almost a million viewers while Rochelle R. Robiso, (wife of Junbert) herself served as an inspiration by many because of her dedication, strong belief and determination with what she's doing to help his husband battling from brain cancer.

She was known by people because of her different style and technique of feeding his husband whom lying on the floor for about months already.

By singing "Imagine me without you", while giving her husband a meal using NGT, because her partner cannot move nor even have the strength to chew his own food with his condition "COMMATOSE".

People then were touched by their stories and was amazed with Rochelle's perseverance and faith. Their followers worked together to helped them in their own way by giving donations, supports and prayers towards her.

In fact, after several attempts of doing it, from 9cm Tumor, it goes down now to 1cm only. God is really good and amazing!

As of now, Junbert is still bouting for that remaining 1cm. In that case, you can join us to extend your help to permanently remove such burden on his head and considered Cancer free! Indeed, we are so excited to inform you that we will be having an event on July 04, 2017 called "Health Forum" at 7:00pm in Cinema 5, Fisher Mall Q.Ave. Q.C. All are free to come to witness how they conquered the challenges God gave to them, and how their love for each other was tested. 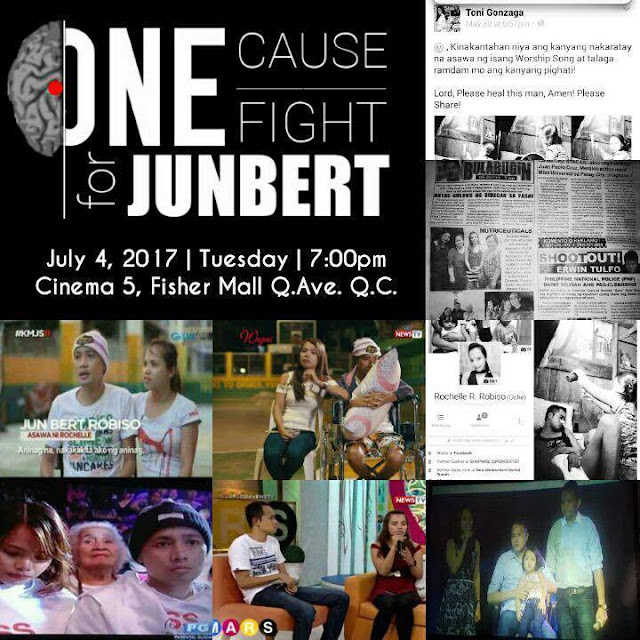