What is your oldest piece of denim wear? What denim piece do you love the most? 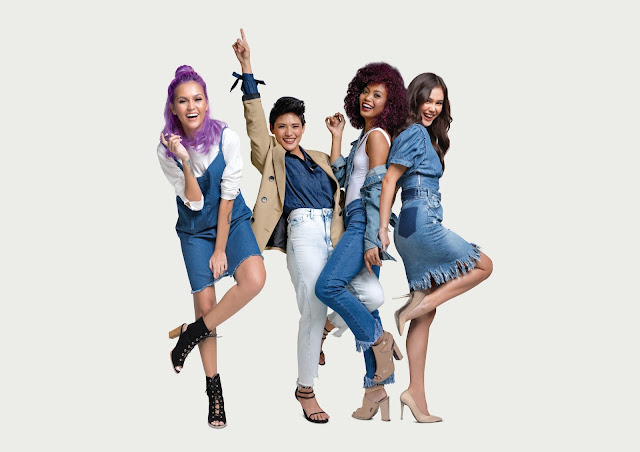 Angela, Adela, Ina, and Janny of “Philippines’ Next Top Model (PNTM): High Street” when asked had interesting stories to tell about their well-loved and cherished denim pieces. Recently, these four strikingly beautiful ladies were hailed the best among the 12 finalists of the country’s premier model-making fashion reality show.

Landing on the top spots of the competition continues to open a more doors for the girls. One of their latest exciting engagement is to be the alluring faces of SM Denim Days – a month-long denim festival offering shoppers great denim finds and exciting events in 63 SM malls nationwide. Find out what is next for these ladies as they also share their denim stories.

Angela Lehmann, 25
Prior to wining PNTM Cycle 2, Fil-Swiss Angela was an interior design student who enjoyed a little bit of farming. She is a vegetarian and likes to eat organic. Though Angela was not really into modelling before she joined the competition, she wanted to prove that having a condition like scoliosis did not hold her back from pursuing a career in the industry.

She dislikes using single-use plastics or disposables utensils, straws and water bottles. Now that she’s the newest ambassador of SM Woman, she wants to use her voice to raise awareness on environmental concerns such as waste management and animal rights.

The oldest denim piece she owns is a denim jumper. “Actually, I’m unsure if the jumper is mine or my sister’s,” said Angela. She just knows that they have been arguing over it for years now. The PNTM Cylcle 2 winner also loves a good denim jacket. “It never goes out of style and goes with almost goes with every outfit,” she added.

Adela-Mae Marshall, 19
Modeling was never part the plan when Adela’s family moved to the Philippines last year. The youngest of the 12 finalist, Adela only did one fashion show as a favor to her mom’s friend that somehow led her to doing seven commercials before joining PNTM.

Though she turned down a lot of modeling opportunities in her early teenage years due to lack of interest, Adela was eventually inspired by her mom who formerly did modelling and acting in the Philippines back then.

Her oldest denim is a pair of flared/bootleg jeans that she got from her mom. “It just proves that fashion comes in cycles and good denim never goes out of style,” said Angela. She is also fond of denim jackets because they can immediately dress down a nice outfit but also can give it a bit of swag.

Ina Guerrero, 23
Ina may not look like your typical Filipina, but she is 100% Bicolana. When she was younger, she used to spend summer vacations with her family in the Bahamas where here parents both worked as nurses. She has always enjoyed the beach and the salty breeze and sand in her hair.

Ina was 17 years old then when she started joining beauty pageants, bagging already a couple of titles until she tried national competitions. Ina was one of the top 13 finalists in the 2014 Miss World Philippines, and a candidate of the 2015 Binibining Pilipinas. Now, she’s taking time to pursue her Master’s Degree in Business Administration.

She owns a denim jacket she has had since high school. “It was a Christmas gift from my Ninang. You see that is the best part of denim, it will never go out of style,” said Ina. Among other denim pieces, she favors ripped jeans the most because they look edgy, matching best her personality.

Janny Medina, 23
Since she loved watching America’s Next Top Model when she was a kid, being part of PNTM was a dream come true for Janny. Before joining the competition, she was already a full-time model for various events and commercials. According to her, she is doing all this for her son.

Janny aspires to become a celebrated androgynous model in the country. She aims to continue her modeling career, especially after her valuable exposure from reality show, and also maybe one day become a flight stewardess of an international airline.

When asked about her oldest denim piece, it was a pair of blue denim pants. “It’s from my eldest sister. [She] passed it on to my second eldest sister, then passed on me. The pants are already 8 years old,” explained Janny. She is also fond of tattered denim pants. “They give off a laid back and relaxed vibe that is similar to my personality,” she added.

Like the final four of PNTM Cycle 2, most people would find themselves nurturing a mysterious and emotional bond with their well-loved denim. Denim wear has evolved over the years to provide both functionality and timeless style. What once started as a rugged workwear, denim now became a wardrobe staple, ranging from denim jeans of various cuts to shirts, shorts, jackets, and skirts – becoming also an expression of the wearer’s mood and personality.

###
To find out more about Denim Days at SM and for exclusive news about SM Supermalls, visit www.smsupermalls.com or follow SM’s official social media accounts on Facebook, Twitter and Instagram; and get an insider access to all the fun happenings at SM Supermalls nationwide through SM’s Viber Public Chat. Tweet your thoughts, upload and share your photos about your memorable moments at SM, then use its official hashtag #EverythingsHereAtSM.