The Actors Guild of the Philippines in cooperation with CATMATES, Inc. will have its first ever ‘’SHOOT WITH THE STARS 2015’’.  Shoot with The Stars is a two-day shooting competition for a cause event happening on November 07 -08, 2015 from 8:00 am to 6:00 pm at Southern Police Distrrict (SPD) Firing Range, Fort Bonifacio, Taguig City. 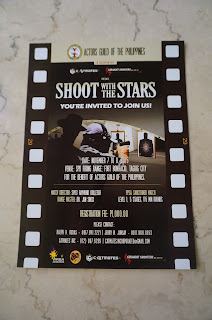 Registration fee is Php 1,000.00 that will cover the entrance and a raffle ticket. The event will feature actors and actresses who will be competing with gun enthusiast and from PNP, AFP and other organizations.

Over 300 shooters expected in participation.  We would like to invite you to become one of our sponsors for this “Shoot with the Stars 2015” most awaited event. Attached are the sponsorship pa

Those who would like to be a sponsor and those who want to help this advocacy can do so by being one of the following:

Actors Guild of the Philippines is an organization mandated to foster goodwill and camaraderie among film and television actors and to promote and protect the rights and welfare of actors and workers of the film industry. It has also recognized excellent artistic performances as a guild of the Film Academy of the Philippines. #starshootfest, #catmates, #actorsguild
Published: 11/04/2015