Kate is a suave, successful classical pianist just diagnosed with ALS (commonly known as Lou Gehrigs Disease). Bec is a brash college student and would-be rock singer who canbarely  keep her  wildly  chaotic  affairs,  romantic  and otherwise,  together.  Yet,  when Bectakes a job assisting Kate, Kate sees something special in the way Bec takes care of her. Kateand Bec find each other’s  strength through their weaknesses. You're Not You explores howtwo  strangers  can  bring  out  the  best  in  each  other  even  in  the  midst  of  trials  andtribulations.  This movie also gives face to the much talked about ALS and will definitelymake people more compassionate with victim of the said disease.Initial release: October 10, 2014 (USA)Director: George C. WolfeRunning time: 103 minutess`Producer: Hilary SwankGenre: DramaHilary Swank, Emmy Rossum and Josh Duhamel 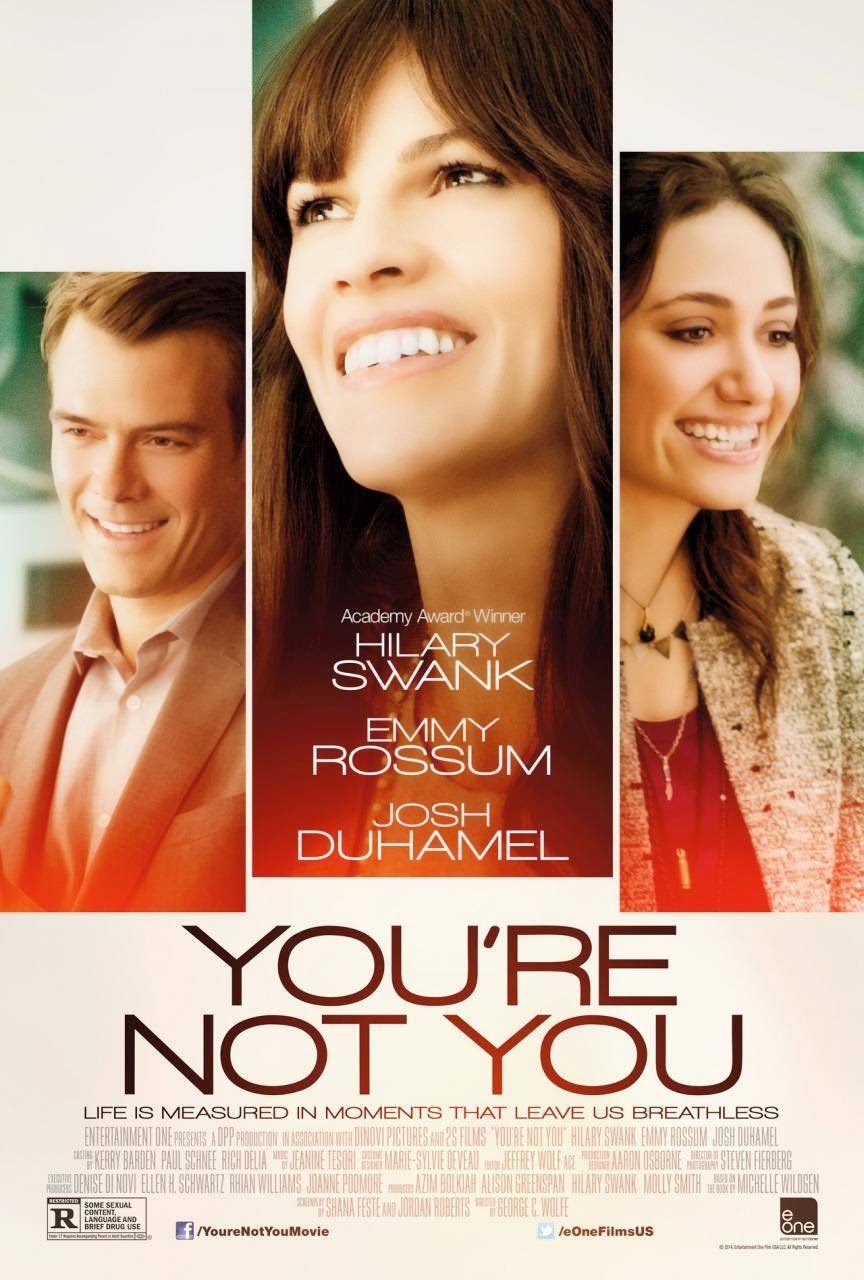 ﻿
WHAT IS ALS?Amyotrophic lateral sclerosis (ALS) or  Lou Gehrig's disease, and rarely Charcot disease—isa neurodegenerative  disorderwith  various  causes.  The  term motor  neurone  disease (MND)  issometimes used interchangeably with ALS while others use it to refer to a group of similar conditionsthat  include ALS.   ALS is  characterised by  muscle spasticity,  rapidly  progressive weakness dueto muscle wasting. This results in difficulty speaking, swalllowing, and breathing. The disease usually starts around the age of 60, except in cases that are directly  inherited when the usual age of onset isaround 50.
About 5 to 10% of cases are directly inherited from a person's parents.  ALS is the most common of the five types of motor neuron disease.The average survival from onset to death is three to four years.   Only 4% survive longer than 10years, although rare cases survive 50 years or more. Most die from respiratory failure. In much ofthe world rates of ALS are unknown.  In Europe the disease affects about 2.2 people per 100,000per  year. In  the  United  States,  more  than  5,600  are  diagnosed  every  year,  and  up  to  30,000Americans are currently affected. ALS is responsible for 2 deaths per 100,000 people per year.Descriptions  of  the disease date back  to at  least  1824 by Charles  Bell. In  1869 the connectionbetween  the  symptoms and the  underlying  neurological  problems were  first  described by Jean-Martin Charcot who in 1874 began using the term amyotrophic lateral  sclerosis.   It  became wellknown in the United States when it affected a famous baseball player by the name of Lou Gehrig, and later when the ice bucket challenge became popular in 2014.
Source: Wikepedia
Who is Lou Gehrig?
Baseball player1. Henry Louis or Lou; Gehrig was an American baseball first basemanwho played 17 seasons in Major League Baseball for the New York Yankees.  Usingnumber 4 as his mark, Lou plays First baseman and pinch hitter2. Born: June 19, 1903, Yorkville, New York City, New York, United States3. Died: June  2,  1941, Riverdale,  New  York  City,  New  York,  United  States andburied in Kensico Cemetery, New York.4. Spouse: Eleanor Gehrig (m. 1933–1941)﻿
Published: 11/20/2014