Another inspiring movie, LIFE OF PI

We decided to watch "Life of  Pi"  over "Sinister"  movie    because of  the  very good review from different critics.   We first  played  the latter  but at the beginning of the film, it looks thrilling but boring so we stopped.

In  the first twenty minutes of  "Life of Pi",  my two daughters wanted to fast forward the movie where they expect  Pi and the tiger  at the ship wreck  living together.   I kept my eye  focused  from the first minute  to the end.  The movie is simply amazing,  It's not just about survival at sea but  perseverance and  faith in God.

"Life of Pi"  is  movie  based on  Yann Martel's novel of the  same title.  At least thrice in the movie, I've felt my eyes were cloudy.   I couldn't  say a word to describe but  it really affected my whole life emotionally on a higher level.

I like the part when Pi decided to  live in the same boat with Richard Parker, the tiger.  In order to survive, he said   that  they need to learn to communicate with each other and respect each other's territory.

We can't get over  with the movie and has a been a topic for  the whole day and maybe the whole week.  I can't stop thinking how amazingly the movie is.  How beautiful!  It's still on my mind.


It could be really fantastic  and  I bet if I were the  interviewer  who'd write the story I would have a second thought  about  the survival story with animals in the same boat.   But as  I've  watched the whole film, it made me believe that nothing is impossible if  you have faith in God and  a strong will to live and one should never give up til the last  step of  the journey.


“The reason death sticks so closely to life isn't biological necessity; it's envy. Life is so beautiful that death has fallen in love with it, a jealous, possessive love that grabs at what it can.” -Yann Martel, Life of Pi


I have no doubt  why the movie  had eleven nominations in the 85th Academy Awards.  We regret that we did not watch it at the big screen in 3D. 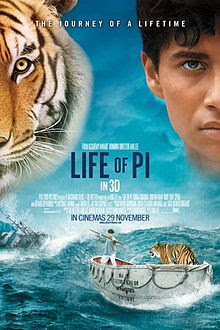 
It's important in life to conclude things properly. Only then can you let go. Otherwise you are left with words you should have said but never did, and your heart is heavy with remorse. That bungled goodbye hurts me to this day. I wish so much that I'd had one last look at him in the lifeboat, that I'd provoked him a little, so that I was on his mind. I wish I had said to him then - yes, I know, to a tiger, but still - I wish I had said, "Richard Parker,  it's over. We have survived. Can you believe it? I owe you more gratitude than I can express I couldn't have done it without you. I would like to say it formally: Richard Parker, thank you.- Yann Martel, Life of Pi